A tribute to Ballet

Tait Friends and their guests are invited to join us for our tribute to ballet with music from the great ballets, featuring artwork by Ann Seddon inspired by Stravinsky’s Firebird, and Prokofiev’s Cinderella. The evening also celebrates some of our Patrons and will include a conversation with celebrated Australian portrait painter, June Mendoza AO OBE. We are also delighted that Leanne Benjamin AM OBE’s new book ‘Built for Ballet’  will be available to purchase. The book follows her sparkling career from her beginnings in Australia to playing principal roles with The Royal Ballet, London. We are so proud of her!

“Leannes extraordinary journey really comes to life in this refreshingly honest account of her career in dance. She was not only a brilliant Principal with The Royal Ballet but has made a significant impact on the artform through her coaching of the next generation of performers. With her consummate artistry, tenacity, warmth and wit, she truly is built for ballet!”

We are delighted to confirm a special guest appearance by one of Australia’s greatest pianists and Tait Patron, Piers Lane AO. Piers has just returned to the UK from Australia which included acclaimed performances with Musica Viva, his continued stewardship of the Sydney International Piano Competition,  and ended with performances at the Australian Festival of Chamber Music in Townsville.

June will share her memories about ballet in the UK and Australia, the many famous dancers she has painted, and of her Mother, Dot Mendoza. Dot played for Pavlova, and Borovansky, and for many years was JCW’s company pianist. In the 1960’s she was associated with The Mavis Bramston Show in Australia as scriptwriter, composer and performer, in later life she coached actors in performance and voice production. Among those she taught were Barry Humphries, June Salter, Gordon Chater, John Meillon and Jill Perryman. …a truly fascinating life.

Our Master of Ceremonies will be the inimitable Ross Alley once again ably supported by Chad Vindin (piano) and we also look forward to introducing you to some of our 2021 awardees performing music inspired by ballet and dance.

We also take this opportunity to bid a fond farewell to Linda Apelt, Agent General for Queensland to the United Kingdom. During her tenure as Agent General her support of young Australian artists and our work has been truly outstanding.

In closing this concert would not be possible without the generous support of Leslie MacLeod-Miller. Leslie has kindly offered his beautiful home as the venue for this unique artistic event. We thank him most sincerely. Places are strictly limited…book now. 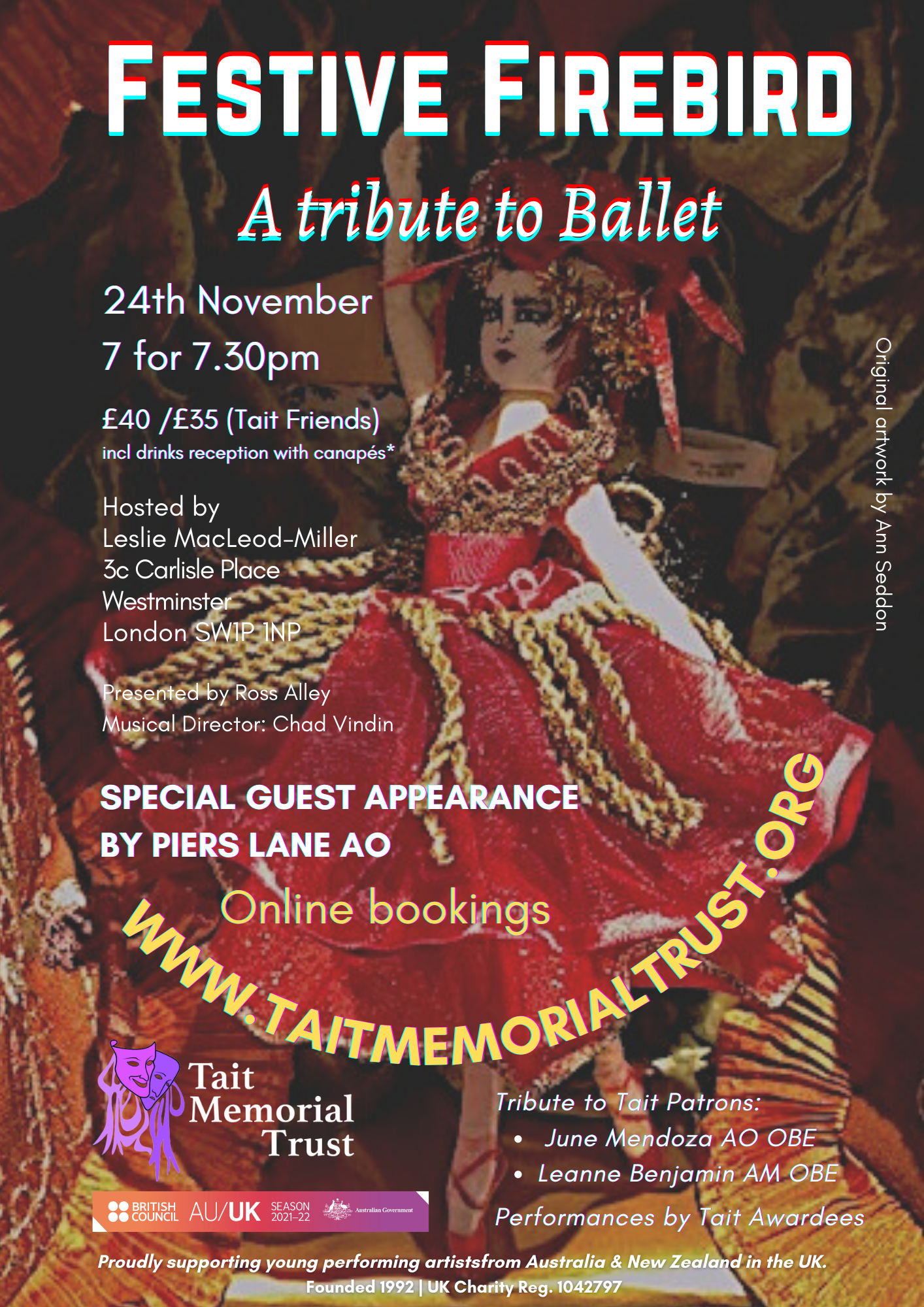