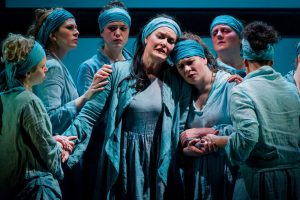 You’re currently performing with the English Touring Opera in Rossini: Fireworks! Can you tell me about your first experience with Rossini – how it came about and how your relationship with the composer has grown since your career began?

My very first experience with Rossini was singing Rosina in a touring production for OzOpera (the touring arm of Opera Australia) in 1998. On alternate nights I sang the chorus and played percussion onstage in the overture!

I think I’ve always been quite wary of Rossini. I’ve done a lot of bel canto (like Donizetti and Bellini) but felt that Rossini was a bit too specialist for me – too hard, too many runs, too light and high. Returning to it now after spending the first part of this year singing Monteverdi, it feels about right. I’d never say it’s easy and this particular concert program is a big sing for me (some long arias and a big chunk of Elisabetta for the finale), but it feels more “doable” than it used to.

How do you prepare your repertoire for a concert performance like this one? Does it differ from when you get ready to play a staged role?

I guess the trick with preparing a concert is how to “sell” a piece when you won’t have the luxury of costumes and sets and lighting. Also, the biggest hurdle for me is literally singing the pieces. In an opera, you might have four weeks of rehearsals in which to work out any technical problems and learn how to get around the “corners” of a piece. Hopefully, by opening night you’ve sung the tricky bits so often – under lots of different circumstances – that you can’t help but get it right. Concerts are not like that; chances are you might have a week (if you’re lucky) of music calls with the conductor and a pianist and then later with the orchestra. It’s a fast, short learning curve. The only way you can be really well prepared is to in fact be really well prepared!

For developing artists, how important is learning concert work alongside full roles? Do the skills you need for both translate easily to one another, or must you practice in the different styles of working?

Concert work still forms a very valuable (and lucrative!) backbone to my opera work. Learn all the “standards” (Messiah, Elijah, Verdi Requiem), as they will crop up again and again throughout your performing life. I’ve paid many a school bill or mortgage payment with Easter Bach Passion fees!

Stylistically, opera and oratorio aren’t necessarily a million miles apart. They both desire to tell a story and make the listener think and feel something. As all good music does.

Your studies began in Canberra at the School of Music, before you moved to the United Kingdom to pursue further training at the Royal College of Music. Can you tell me about that move and what it meant to you as a young singer?

Moving to the UK early on was a massive step for me. It enabled me to be seen in London regularly, and after I joined the roster of a big UK agency (IMG), I basically studied and worked solidly for 4 years, before I came back home to work for Opera Australia. It was great to be exposed to so much music at such a high level; we regularly got coaching from the best people in the industry even before we got to work for them, so there was a level of familiarity that I wouldn’t have had if I’d stayed in Sydney or Canberra. I remember the first concert I ever went to in London was Anne Sofie von Otter singing Alceste at the Barbican – it really doesn’t get better than that!

Pursuing a career overseas is currently a goal for many young singers, but of course, a major move comes with both opportunities and difficulties. Do you have any advice to developing performers who wish to pursue further study outside of Australia?

Develop self-love! Seriously, this doesn’t mean having a big ego and thinking that you are awesome, but genuinely being kind to yourself and realising that you are human. It’s a very tough industry and there are a lot of knockbacks along the way. Even now I’m asked to audition for things and I may or may not get them. You have to learn to be happy in your own skin despite constant rejection. I’ve become a lot more philosophical about rejection as I’ve gotten older and learned that it’s not necessarily about me as a person or as a performer. Not everyone will love what you do and that’s ok.

You have performed roles all over the world, in houses from the Royal Opera House to Teatro Sao Carlos in Lisbon, and back home with Opera Australia. How do you look after yourself when you’re on the road and away from home for long periods? Do you have a moveable routine or do things change depending on your work and where you are?

When I’m away from home I try to maintain some semblance of normality. I take posh candles, pictures in frames and usually at least one baking tray with me! I walk a lot no matter where I am, so being in a new place just gives me new places to walk. I also do yoga either on my own or in a class, so this is often a way of meeting some “locals”.

Staying calm and focussed before performances and during preparation periods is much discussed for all musicians. Do you have ways of managing stress or “busy-ness” when things get hectic?

Definitely yoga and the meditative side that that involves. I’m a much calmer, happier, nicer person when I’m regularly going to a class.

I also need to be well prepared. I don’t like “winging it”, so I avoid ever having to live too dangerously in terms of the music. Preparation means less stress and less stuff that can go wrong. (That being said, I have done jump-ins and lived to tell the tale. Last year I was rung at very late notice to jump in for an ill colleague for the CBSO. Could I learn Juno and Ino from Semele in 3 days? Well, I did. But it did take several years off my life!)

Finally, if you could go back to the start of your career and give yourself a piece of advice about the industry you were about to join, what would it be?

My best advice would be to just go for it! Ask that person for a coaching, thrust your business card into that person’s hand. You only have one life and one shot at a career, so do it!