It is with great sadness The Tait Trust announces the death of Sir Neville Marriner last night. He was a personal friend of John Amis and his first wife Diana and his second wife Molly and their son Clarinetist Andrew Marriner.

“It was a life of music making of the highest quality that gave pleasure to many. And if he excelled in the lighter classic on the whole, he could on the occasion dig deep ; he recorded a thrilling Eroica symphony , his Metamorphoses challenges  Klemperer and Karajan in his emotional depth, and his set of the Handel Concerto Grossos is still the most satisfying in the catalogue” John Amis  2013 We send our deepest condolences to the Marriner family at the loss of such a great man.

We send our deepest condolences to the Marriner family at the loss of such a great man.

John Amis writes: Not exactly the Algonquin, but a pleasant, cheap and not nasty eating place next door to the old Mercury theatre in Notting Hill Gate, west London, was where a handful of musos met most days for lunch in the 40s and 50s. Neville was there with his first wife, Diana, the broadcaster Antony Hopkins and the soprano Alison Purves, the violinists Alan Loveday (soloist and leader of the Academy), Olive Zorian (the quartet leader, the leader of Benjamin Britten’s orchestra, and my wife), and sometimes Neville’s teacher and guru, the great Albert Sammons. Talk at lunch was funny and gossipy. Neville was sharp-edged, a good driver, a handyman, nifty at tennis, always lucky and good at cards. With the horn player Barry Tuckwell and clarinettist Gervase de Peyer, Neville (as principal second violin) was one of the new generation of players in the London Symphony Orchestra. They were too brilliant and reliable to get the sack, but they must have got near dismissal at times because they dared to challenge conductors. 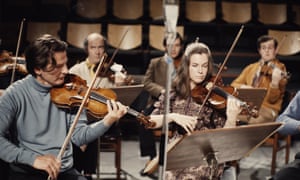 During the war the Martin String Quartet, led by David Martin with Neville as its second violinist, had gigged for the Council for the Encouragement of Music and the Arts, playing in some places that had never had concerts.It was a great moment for the quartet to be invited to play in the Aldeburgh Festival. Britten requested them to play a favourite quartet of his, the Verdi. This quartet has a finale that begins with a fugue, led by the second violin. Just before going on stage David said: “Now Neville, for God’s sake, don’t start off the fugue too fast.” Neville responded by beginning the fugue too slowly by half. Britten was not best pleased. On marrying Diana, who became a bookseller specialising in incunabula, Neville found himself living in the G&T belt, sometimes finding that he was the only one not wearing an old school tie. Then came the request from his friend John Churchill to give a recital at St Martin in the Fields. He found that several of his string-playing friends had received a similar request. They all had to refuse because, straight our of college, they had not enough repertoire. Then Neville had the bright idea of them combining to make a tiny orchestra, where they would concentrate on

Then Neville had the bright idea of them combining to make a tiny orchestra, where they would concentrate on not-too-demanding music of the 18th century – ice-cream composers, Neville called them: Corelli, Torelli, Albicastro, Vivaldi. Thus the Academy was born. Fast forward to the new century. Neville’s hair had at last gone white, still playing a good game of tennis in his 80s in the garden court of the cottage on the Dorset-Devon border where he lived with his second wife, Molly.

A good cook, a quick packer and a voracious reader, she shaped his career, managed his life and was good at social affairs. Neville no longer directed the Academy but had dates as a conductor, sometimes in three continents in as many weeks. It was a life of music-making of the highest quality that gave pleasure to many. And if he excelled in the lighter classics on the whole, he could on occasion dig deep: he recorded a thrilling Eroica symphony, his Metamorphosen challenges Klemperer and Karajan in its emotional depth; and his set of the Handel Concerto Grossos is still the most satisfying in the catalogue.