We are all thrilled for 2019 #TaitAwardee Kiandra Howarth for winning this years AUD$30,000 Joan Sutherland & Richard Bonynge Bel Canto Award and Foundation #BelCantoAward which was recently announced in Sydney. Kiandra was also awarded the AUD$1000 Audience Choice Prize, and was also placed third in the Elizabeth Connell Prize for Aspiring Dramatic Sopranos, winning $5000.  The Gold Coast-born soprano holds the distinction of being the first finalist to ever participate in both competitions, Kiandra is a former member of the Royal Opera House’s Jette Parker Young Artist Programme,

Earlier this year Kiandra and fellow Tait Awardee, Krystal Tunnicliffe, piano delighted our Tait Friends singing, “We’ll Gather Lilacs” by Ivor Novello at our annual Friends event at Stoke Lodge, the official residence of the Australian High Commissioner, London. We thank the High Commissioner, His Excellency the Hon George Brandis QC most sincerely for inviting us into his home for such a special occasion.

We are delighted to announce that the Tait Trust will now support young performing artists from Australia and New Zealand.

This decision is inspired by the work of the Tait Brothers who were instrumental in the development of the Arts in Australasia in the 20th Century as can be seen in the advertisement for J.C.Williamson Limited. 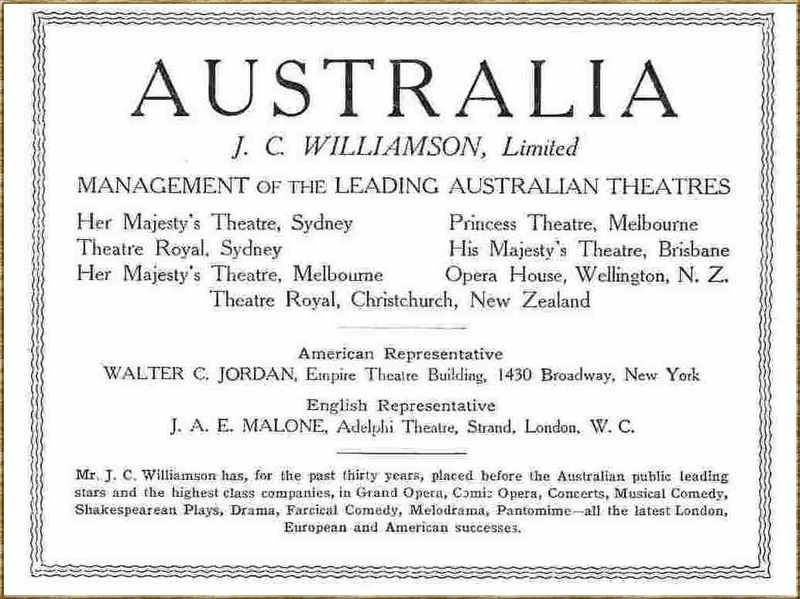 Over the years we have supported several young New Zealander’s due to our partnership with the Joan Sutherland & Richard Bonynge Foundation, Bel Canto Awards, including James Ioelu and Marlena Devoe (pictured here with Australian tenor, Gerard Schneider at our 2014 Tait Winter Prom).

Our wish is to provide financial and mentoring support for outstanding NZ dancers, singers, instrumentalists & composers to develop international careers at the highest level.

We extend a warm invitation to all Kiwi’s living in the United Kingdom who wish to join us to help their talented countrymen. Maybe consider sponsoring an award or contribute towards our Endowment Fund.

Please contact james@taitmemorialtrust.org if you wish to learn more about this exciting development, or would like to be involved.

We are delighted to have such a strong connection with the Joan Sutherland and Richard Bonynge Foundation http://www.jsrbfoundation.com/awards-prizes/tait-memorial-trust/ .

For the past 36 year’s, the aim of this non-profit Australian organisation has been to raise money to help assist our most talented young opera singers fulfil their given potential. With the development of the Foundation in 2010 this has given us greater exposure and opportunities to expand on the activities the Society has presented since its inception in 1978. To date, we have awarded over $300,000 worth of scholarships and study grants and hope to further develop our involvement with these young singers by presenting masterclasses, workshops and a mentoring programme.

From the home page of the JS & RB Foundation website

The Trust looks forward to meeting the 2013 Tait Memorial Trust Prize winner, soprano Marlena Devoe from New Zealand who will be offered a prestigious London concert platform as part of her prize from the Bel Canto Awards . Dame Joan Sutherland was one of our founding patrons and loyal supporters due to her long association with Sir Frank Tait ( Isla Baring’s father) the Tait family and J C Williamson’s. The Sutherland-Williamson tour of Australia in 1965 is legendary and was a fitting epitaph to the life of Sir Frank and the enterprise of the Tait brothers.

We wish the Joan Sutherland & Richard Bonynge Foundation well and salute the work they are doing in supporting emerging operatic talent in Australia.

Australian born soprano Lauren Fagan is a young artist at the outset of a promising career. Initially completing a Business degree, Lauren has recently moved to London to accept her scholarship on the Opera course at The Guildhall School of Music and Drama under the tutelage of Susan Waters. Lauren is a 2013 Tait Memorial Trust Awardee.

Lauren Fagan has been in Banff, Canada for the past 5 weeks singing the role of Mrs Coyle in Owen Wingrave. This was the Canadian premiere of this opera, conducted by Dominic Wheeler and directed by Kelly Robinson. GSMD took across 6 singers from the opera course for the production where they got the chance to work with the original Owen, baritone, Benjamin Luxon.

Lauren is about to start her second year on the opera course at The Guildhall School of Music and Drama. In the first term Lauren will be singing the role of Lia in Debussy’s L’enfant prodigue at the Barbican and in the second term, Lauren will sing the role of the Blue Fairy in Jonathan Dove’s The Adventures of Pinocchio

Lauren’s award is supported by the Michael Whalley Foundation

Australian born soprano Lauren Fagan is a young artist at the outset of a promising career. Initially completing a Business degree, Lauren has recently moved to London to accept her scholarship on the Opera course at The Guildhall School of Music and Drama under the tutelage of Susan Waters. In August this year Lauren will be singing the role of Mrs Coyle in Britten’s Owen Wingrave as part of the Banff Summer Arts Festival in Canada. In Guildhall’s Opera scenes she has been featured as; Micaëla Carmen, Jenůfa Jenůfa, Marschallin Der Rosenkavalier, Natasha War and Peace, Vitellia La clemenza di Tito, Alice Falstaff, Fiordiligi Così fan tutte and First Lady Die Zauberflöte. Other operatic roles performed include Frasquita in Carmen at The State Theatre and Chorus in the Australian premiere of Dead Man Walking.

Lauren was runner up in the 2012 McDonald’s Operatic Aria Final, with finalists from around Australia and New Zealand. In 2012, she also placed third in the National Joan Sutherland Richard Bonynge Vocal Scholarship and won the Operatic Aria Final at the Ryde Eisteddfod. She was awarded ‘The Dame Nellie Melba Scholarship – ‘Patrick and Vivian Gordon Award’ from ‘The Dame Nellie Melba Opera Trust’ in 2011 and 2012. To celebrate the 150th anniversary of Dame Nellie Melba she performed a solo recital on 3MBS FM, Melbourne as part of Ann Blainey’s radio interview, ‘I am Melba’. Her performance of “Depuis le jour” was later selected for the 3MBS Alive CD (2012).

She has developing experience as a soloist; performing for The Opera and Arts Support Group, Clonter Opera, Artsong NSW, Opera on the Beach, Joan of Arc – Voices of Light Oratorio, Carols in the Domain, World Youth Day Opening Ceremony and Australian Idol Grand Final.