The Tait Memorial Trust was formed in 1992 by Isla Baring OAM in memory of her father Sir Frank Tait and his four brothers who played such an important part in the establishment of theatre and the performing arts in Australia. It also recognises with an annual award the major contribution of her mother, Viola, Lady Tait – who died in 2002 – as a founding patron of the Trust.

The Trust offers awards/grants for postgraduate study, performance opportunities to young Australian musicians and performing artists, and general help in the furtherance of their careers while resident in the UK. Through the Royal Over-Seas League it grants a scholarship to ‘the Australian musician showing the most promise’ in the Annual Music Competition. The Trust also grants a prize to the winner of Opera Foundation Australia’s Covent Garden National Opera Studio Scholarship. The Trust also contributes financially to the Joan Sutherland & Richard Bonynge Foundation, Bel Canto Awards and will provide a concert platform in London to the winner. 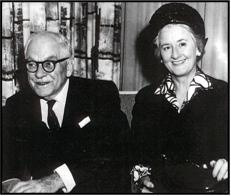 In 2013 the Trust created a new scholarship at the Royal College of Music to be known as the ‘Tait Scholar’. In addition to this, the Trust continues to support its numerous existing awards: the Sir Charles Mackerras chair with the Southbank Sinfonia; grants to young Australian dancers with the Royal Ballet School, English National Ballet School and the Rambert Dance Company; grants to singers with the Wales International Academy of Voice and a special award to a finalist in the Mietta Song Recital Award in Melbourne.

To ensure its continuance the Trust arranges regular fund raising events and concerts, invariably featuring the talented young winners of the various awards, and relies a great deal on financial support from the business sector, private donors and other loyal supporters.

The Tait Performing Arts Association, formed in November 2011 in Australia, http://www.tait.org.au supports the same ideals as the Trust. Please help us to build our new Foundation in Australia so we can work together to spread our wings and help nurture our young talent to survive in this competitive world.

In Melbourne, Australia, three years before the turn of the century, a family of five sons of John Turnbull Tait, a sheep farmer in Lerwick, Shetland who had emigrated to Australia in 1860, emerged into the entertainment world to become the dominating influence in the theatrical scene for the next seventy years.

One of their earlier ventures, in 1905, was to make the world’s first full length feature film – a 9,000 ft film on the capture of the notorious Ned Kelly Gang. The film was a sensation and was played in every Australian capital city until the films wore out ­ only fragments remain.

J & N Tait Concert Management was formed in 1906. From concert management the Tait brothers amalgamated with J C Williamson in 1920 to form the largest theatrical empire in the world, offering a constant flow of ballet, drama, grand opera and musical comedy.

They presented world famous celebrities such as Melba, Chaliapin, Flagstad, Pavlova, Harry Lauder, David Oistrakh, Margot Fonteyn, Menuhin and many others. In 1957, Frank Tait was made a Knight Batchelor by the Queen in recognition of the major contribution he and his brothers has given in their dedication to Australian theatre.

It was Sir Frank’s ambition to present Dame Joan Sutherland to the Australian public after her international acclaim. The Sutherland Williamson Opera Company was formed in 1963. Richard Bonynge as Artistic Director engaged a team of world renowned principals and internationally successful Australian artists. One of the principals was Luciano Pavarotti, a young tenor from Modena. The chorus was all Australian. There was no government subsidy and the fate of Williamson’s future rested on the success of the venture.

Sir Frank lived to see his ambition fulfilled. The triumphant Melbourne opening heralded the return of Dame Joan to her homeland. It was a season never to be forgotten. In Richard Bonynge’s words: “Sir Frank Tait has done the greatest service to Australian Theatre and to the arts of anyone we know.”

Sir Frank died at the age of 81 after the Melbourne season finished and while the company were in Adelaide. It was the end of an era in the history of Australian theatre.

Lady Tait’s zest for life was an inspiration. These qualities remained with her always together with a remarkable memory, clarity of mind and youthful outlook.

She was a champion of new and emerging talent, adjudicating for numerous scholarships and awards both in Australia and overseas. As an adjudicator for The Mobil Quest in 1950, Viola was instrumental in launching Joan Sutherland’s career.

Another of her loves was writing and researching theatre history. She amassed a formidable collection of theatre memorabilia and was the author of The Family of Brothers (1971), which chronicled the contribution of the Tait brothers to Australian theatre.

Her last book, Dames, Principal Boys and all that: A History of Pantomime in Australia (2001) was lavishly launched at Her Majesty’s Theatre, Melbourne, the home of the Tait-Williamson empire. When Viola’s death was announced the illuminated sign outside the Theatre read “Farewell Lady Tait, Star”.

ISLA BARING has been awarded the Order of Australian Medal (OAM) general division for her service to the arts — supporting young Australian musicians and performing artists!

Isla Violet Baring OAM founded The Tait Memorial Trust in 1992 in memory of her father, Sir Frank Tait and his brothers, who played such an important part in the establishment of theatre and the performing arts in Australia. Isla’s mother, the singer Viola Tait, inspired her to organise a fundraising concert in support of a young Australian singer, Liane Keegan, who was newly arrived in London. It kicked off with a Christmas Concert at Australia House. The concert was a great success, became the foundation of our yearly events and Liane is now singing major roles in Berlin.

The Tait Memorial Trust has since then raised more than £700,000 to help support young Australian musicians and dancers who need financial assistance while they are studying in the U.K. The Trust offers grants for study, performance opportunities to young musicians and performing artists as well as general help in the furtherance of their careers while resident in the UK. Many of the young Artists continue to achieve world recognition and perform at the Tait’s Rush Hour concert series which regularly presents emerging and established Australian talent.